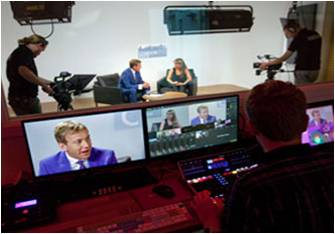 London City Studios has 5 state of the art studios to satisfy a multitude of filming requirements, from live
streaming, and corporate videos to training videos.  As well as studios, lighting, props and film cameras, they have a full service production facility on-site that can bring video content to life quickly and without the need to outsource anything.

With a large retail client base and an optimum central London location, London City Studios wanted to raise the awareness of their offering and target the corporate market. London City Studios decided to join the “Ready to Supply the City” programme and worked with a number of business coaches and mentors. This initially resulted in the launch of a new corporate brand identity and website specifically designed to target the corporate market which instantly saw significant results. London City Studios also worked with a professional coach on their presentation skills which resulted in a large business win with a leading advertising agency. In addition, London City Studios also received support and 1-2-1 training on completing a major tender document and subsequently were shortlisted for a larger public sector contract.

“The East London Business Place (ELBP) has had an amazing effect on London City Studios, not only through attending their workshops and events, but also meeting and learning from the teams involved in the project. I hope we continue to meet and learn from ELBP and we continue to target and work for large corporate companies. I cannot thank ELBP enough and I would recommend them to all SMEs”.