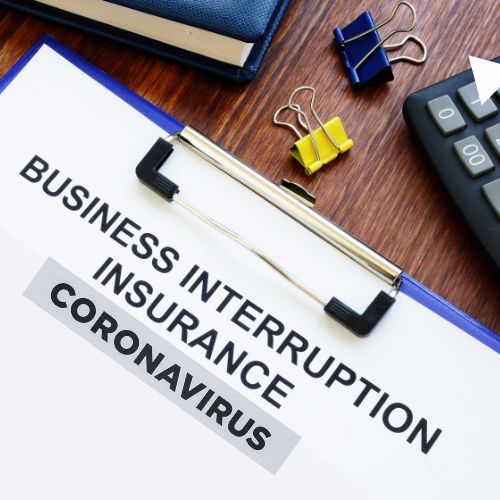 This briefing provides a summary of the outcome of the Court case brought by the Financial Conduct Authority (FCA) to clarify the law regarding claims against insurance policies resulting from the effects of Covid-19.

Many companies and other trading organisations have commercial Business Interruption Insurance (BII), which is designed to give them cover – and therefore make payments to them – in circumstances where their normal trading is either curtailed or stopped due to circumstances completely beyond their control.

This often covers matters such as a fire at a warehouse, where not only does the insurance pay for a replacement building and stock but also covers the cost of paying employees during the re-build and making a payment to cover the revenue lost because no customers can be supplied.

Another common clause will provide financial cover if the organisation has to stop trading because of Public Health issues such as we have seen during foot-and-mouth disease outbreaks, when cattle have had to be slaughtered. (Farmers were then compensated under BII as were others in the supply chain, such as transport companies, meat wholesalers and some retailers.)

Naturally, customer policies offered differ between insurance companies, as do the needs of their clients, so there is no ‘one size fits all’ policy – and ‘the small print’ always needs a careful read-through.

Many organisations that have BII not unreasonably assumed that they would be covered for Coronavirus as part of their overall insurance policy, but this turned out not to be the case.

The Problem and The Route to Solution:

The majority of organisations that tried to make a claim under their BII policy were told by their insurance provider that no payment would be made because Covid-19 and its consequences for businesses fell outside the ‘normal’ definition of a ‘notifiable disease’ or other public health matter, which are contained in most BII policies.

This was and still is a massive blow for many trading organisations, particularly SME’s.

Because of the huge number of organisations affected (around 370,000) and a deluge of complaints against many insurance providers the FCA decided to act on behalf of the organisations adversely affected and started legal proceedings against a number of providers in order to test the law.

This ‘test case’ was in part agreed with a selection of large insurance companies, which provided detailed documentation listing their various – and different – BII policies and clauses.

The High Court agreed to hear the case very quickly due to the very large number of businesses affected and the wish of everyone involved to get some legal clarity.

As was expected, the insurance providers argued strongly that the Covid-19 pandemic was an exceptional, unusual and unforeseeable event and should be treated the same as ‘Act of God’ clauses in most insurance policies.

They also argued that they should not in effect be held retrospectively financially liable because of the sweeping new Covid-19 law and regulations introduced by the UK and devolved Governments.

The FCA counter-argued that the whole basis and purpose of Business Interruption Insurance was to protect organisations financially in circumstances arising that were outside their control.

On Tuesday 15th September the High Court, having heard extensive arguments and seen masses of supporting documents from both sides, issued its judgement.

The judgement (162 pages) goes in to fine detail about what is covered in most BII policies and what policyholders could reasonably have expected to be covered for when they bought their policies.

Much of it hinged on the definition of ‘disease’ and ‘denial of access’ (words used in most BII policies) and the Court decided that these words/clauses in the representative sample of policy wordings that it examined do provide cover in the circumstances of the Covid-19 pandemic and, crucially,  that the trigger for cover caused policyholders’ losses.

The judgment says that most, but not all, of the ‘disease’ clauses in the sample policies it looked at do provide cover.

The test case has also clarified that the Covid-19 pandemic and the Government and public response were ‘a single cause of the covered loss’, which is a key requirement for claims to be paid.

So, in summary, the Court largely agreed with the FCA and the estimated 370,000 policyholders that their policies do cover the Coronavirus consequences – and largely rejected the insurance providers’ arguments that Covid-19 was a special case not covered by their policies.

As we said earlier, each individual policy needs to be considered against the detailed judgment to work out what it means for that policy in light of its specific wording.

It is possible that the judgment will be appealed by one or more of the insurance providers.

Any appeal does not prevent policyholders seeking to settle their claims with their insurer before the outcome of any appeal is known.

The FCA and the insurers are considering the judgment and what it might mean in respect of any appeal.

Any applications to appeal will be heard at the High Court.

The FCA and the insurers have agreed that they will seek to have any appeal heard very quickly, given the importance of the matter for so many policyholders.

This includes exploring the possibility of any appeal being a ‘leapfrog’ appeal to the Supreme Court (rather than needing to be heard by the Court of Appeal first) – but don’t worry, this is a legal technicality and does not change the judgement at this stage.

The good news is that the insurers have been instructed to contact all policyholders during the next 7 days to discuss/agree each claim in light of the Court’s judgement.

So, right now you do not need to contact your insurance provider.

With so many claimants, however, it is possible that some people will slip through the net; we therefore suggest that if you do not hear from your insurance provider by Thursday 24th September you should contact them.

Whilst we do not anticipate that any insurance provider will try to duck their legal responsibilities it is possible that some staff and/or intermediaries may not be fully aware of every aspect of the High Court judgement (162 pages remember) and may suggest that your claim is invalid.

If this is the case, we strongly recommend that you challenge this decision and give notice in writing that you do not accept it.

Equally, if you are offered a cash sum over the telephone ask for written confirmation and check your original policy to make sure that the full amount to which you are entitled has been offered.

If you need help with your claim, the FCA has arranged an opportunity for you to talk to its legal team individually and free of charge on Monday 21st September or Tuesday 22nd September – find out more.

Please remember: take your time and DO NOT make a hasty decision about accepting any settlement offered before you are fully satisfied that it’s the correct amount.

Any cookies that may not be particularly necessary for the website to function and is used specifically to collect user personal data via analytics, ads, other embedded contents are termed as non-necessary cookies. It is mandatory to procure user consent prior to running these cookies on your website.